What are the most commonly used chips for UHF electronic tags?

In the past, Alien's RFID tag chip H3 (full name: Higgs 3) was also very popular. Until now, this chip has been used in many previous projects. The large storage space is one of its obvious advantages.

However, with the emergence of various new applications and higher and higher requirements for the reading distance of tags in new fields, it is gradually difficult for the reading sensitivity of H3 to meet the requirements. Alien also updated and upgraded their chips, and there were later H4 (Higgs 4), H5 (Higgs EC), and H9 (Higgs 9).

The chips released by Alien will have public version lines of various sizes and applications. This gives them a great advantage in promoting their chips and occupying the market. Many customers and middlemen can directly get the tags for trial use, which reduces the time and cost of developing tag antennas.

Because the impedance of the H9 and H3 chips is similar, and the bonding method of the chip pins is also similar, the public antenna of the previous H3 can be directly bonded to the H9. Many customers who used the H3 chip before can use the new chip directly without changing the antenna, which saves a lot of things for them. Alien classic line types: ALN-9710, ALN-9728, ALN-9734, ALN-9740, ALN-9662, etc.

Impinj's UHF chips are named after the Monza series. From M3, M4, M5, M6, has been updated to the latest M7. There is also an MX series, but each generation may have more than one.

For example, the M4 series includes: M4D, M4E, M4i, M4U, M4QT. The entire M4 series is a dual-port chip, which can be used as a dual-polarization label, avoiding the situation that the linear polarization label and the read-write antenna polarization cross cannot be read, or the polarization attenuation reading distance is close. It is worth mentioning that the QT function of the M4QT chip is almost unique in the whole field, and it has two storage modes of public and private data, which has higher security. 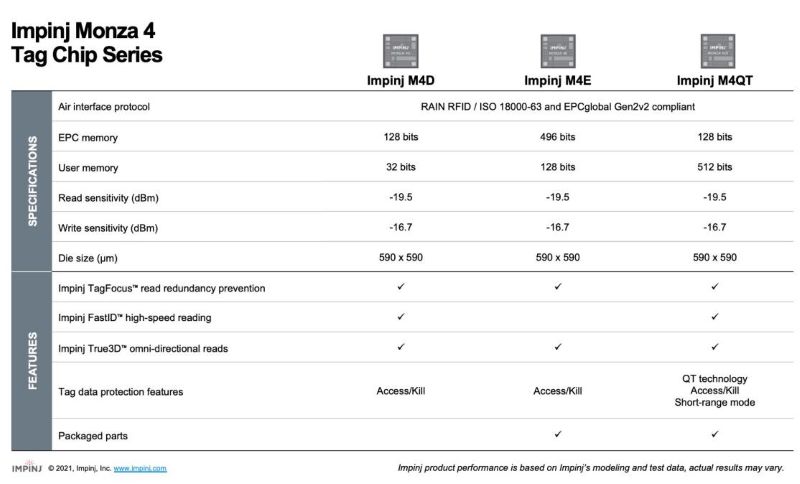 Chips of the same series are mostly different in storage area division and size, and their impedance, binding method, chip size, and sensitivity are the same, but some of them will have some new functions. Impinj's chips are rarely replaced with updates, and each generation has its own shining points and irreplaceability. So until the emergence of the M7 series, the M4 and M6 still occupy a large market. The most common ones on the market are their M4QT and MR6-P, and now there are more and more M730 and M750.

On the whole, Impinj's chips are updated regularly, the sensitivity is getting higher and higher, and the chip size is getting smaller and smaller. When the Impinj chip is launched, there will also be a public line type release of each application. Classic line types include: H47, E61, AR61F, etc.

NXP's Ucode series of UHF tag chips are widely used in clothing retail, vehicle management, brand protection and other fields. Each generation of this series of chips is named according to the application, some of which are rare in the market because of their relatively small application fields.

The U7, U8, and U9 generations in the Ucode series are the most widely used. Also like Impinj, each generation of NXP has more than one chip. For example: U7 includes Ucode7, Ucode7m, Ucode 7Xm-1k, Ucode 7xm-2K, Ucode 7xm+. The first two are high-sensitivity, small memory. The latter three models have larger memory and slightly lower sensitivity.

U8 has gradually replaced U7 (except for the three large memory chips of U7xm) because of its higher sensitivity. The latest U9 chip is also popular, and the read sensitivity even reaches -24dBm, but the storage becomes smaller.

Common NXP chips are mainly concentrated in: U7 and U8. Most of the label line types are designed by manufacturers with label R&D capabilities, and few public versions are seen. 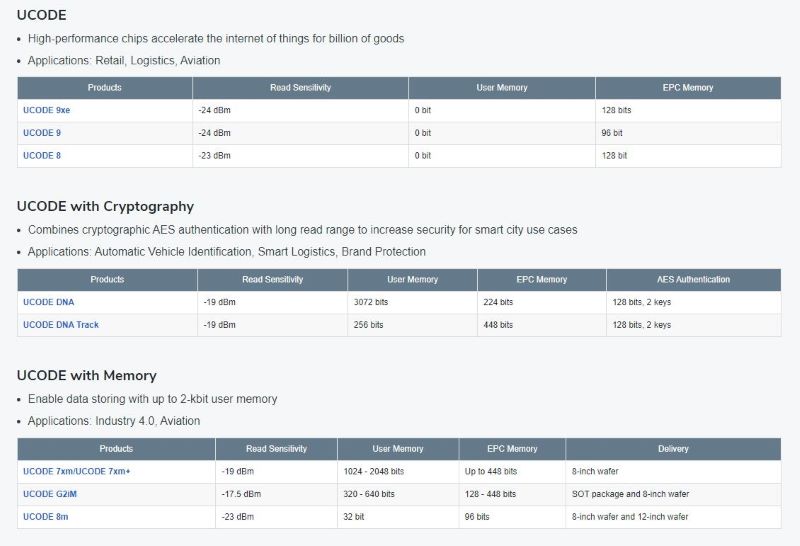 This may be the general trend of RFID tag chip development in world:

1. The size of the chip becomes smaller, so that more wafers can be produced with same size,and the output increases significantly;
2. The sensitivity is getting higher and higher, and now the highest has reached -24dBm, which can meet the needs of customers for long-range reading. It is applied in more fields and can also reduce the number of installed reading devices in the same application. For end customers , saving the cost of the overall solution.
3. The memory becomes smaller, which seems to be a sacrifice that has to be made to improve sensitivity. But many customers don’t need a lot of memory, they only need to make the codes of all items not repeated, and other information of each item (such as: when it was produced, where it has been, when it leaves the factory, etc.) can be completely matched in the system that recorded in codes, and it is not necessary to write all of it into the code.

At present, IMPINJ, ALIEN, and NXP occupy the vast majority of the UHF general-purpose chip market. These manufacturers have formed scale advantages in the field of general-purpose chips. Therefore, other UHF RFID tag chip players are more for special customized development of application fields, Among the domestic manufacturers, Sichuan Kailuwei has developed relatively fast in this respect.

In the situation where the RFID tag market is almost saturated, Kailuwei has blazed a trail by relying on the self-developed XLPM ultra-low power permanent memory technology. Any one of Kailuwei's X-RFID series chips has its own characteristic functions. In particular, the KX2005X special series has high sensitivity and large memory, which are rare in the market, and it also has the functions of LED lighting, on-off detection, and anti-medical radiation. With LEDs, when the tags are used in file management or library management, you can quickly find the desired files and books by lighting the LEDs, which greatly improves the search efficiency.

It is reported that they also launched the minimalist read-only series of chips: ONLY 1 and ONLY 2, which can be regarded as an innovation in RFID tag chips. It breaks the stereotype of the label chip storage partition, abandons the label rewriting function, and directly fixes the code of the label when it leaves the factory. If the customer does not need to modify the label code later, using this method will almost eliminate the imitation of counterfeit labels, because each label code is different. If he wants to imitate, he needs to start with a custom chip wafer, and the cost of counterfeiting is very high. This series, in addition to the anti-counterfeiting advantages mentioned above, its high sensitivity and low cost can be regarded as "the only one" on the market.

Previous：Antenna gain: One of important factors affecting the reading and writing distance of RFID readers
Next：What are the common types of interfaces for RFID readers?