Antenna gain: One of important factors affecting the reading and writing distance of RFID readers

Among them, the antenna gain is an important factor affecting the reading and writing distance of the RFID reader. The antenna gain refers to the ratio of the power density of the signal generated by the actual antenna and the ideal radiation unit at the same point in space under the condition of equal input power. Antenna gain is an extremely important criterion for network access testing, which indicates the directivity of the antenna and the concentration of signal energy. The size of the gain affects the coverage and strength of the signal transmitted by the antenna. The narrower the main lobe and the smaller the side lobe, the more concentrated the energy will be, and the higher the antenna gain will be. Generally speaking, the improvement of the gain mainly depends on reducing the lobe width of the radiation in the vertical direction, while maintaining the omnidirectional radiation performance in the horizontal plane.

1. Unless otherwise specified, the antenna gain refers to the gain in the maximum radiation direction;
2. Under the same conditions, the higher the gain, the better the directivity, and the farther the distance of radio wave propagation, that is, the increased distance covered. However, the width of the wave velocity will not be compressed, and the narrower the wave lobe, the worse the uniformity of coverage.
3. The antenna is a passive device and will not increase the power of the signal. The antenna gain is often said to be relative to a certain reference antenna. Antenna gain is simply the ability to efficiently concentrate energy to radiate or receive electromagnetic waves in a particular direction. 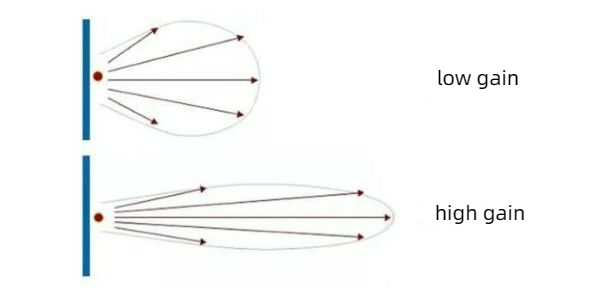 The radio frequency signal output by the radio transmitter is sent to the antenna through the feeder (cable), and is radiated by the antenna in the form of electromagnetic waves. After the electromagnetic wave reaches the receiving location, it is received by the antenna (only a small part of the power is received), and sent to the radio receiver through the feeder. Therefore, in wireless network engineering, it is very important to calculate the transmitting power of the transmitting device and the radiation capability of the antenna.

The transmitted power of radio waves refers to the energy within a given frequency range, and there are usually two measures or measurement standards:

Relative to the proportional level of 1 milliwatt (Milliwatt).

The two expressions can be converted to each other:

In wireless systems, antennas are used to convert current waves into electromagnetic waves. During the conversion process, the transmitted and received signals can also be "amplified". The measure of this energy amplification is called "Gain". Antenna gain is measured in "dBi". 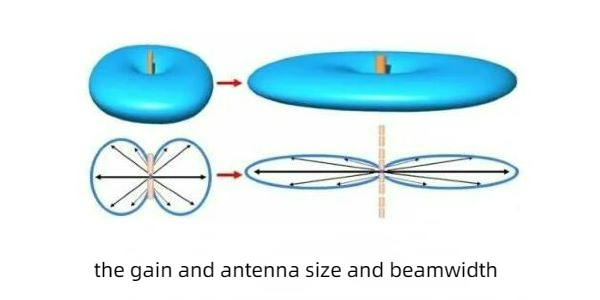 Flatten the "tire", the more concentrated the signal, the greater the gain, the larger the antenna size, and the narrower the beam bandwidth.
The test equipment is signal source, spectrum analyzer or other signal receiving equipment and point source radiator.
First use an ideal (approximately ideal) point source radiation antenna to add a power; then use a spectrum analyzer or a receiving device to test the received power at a certain distance from the antenna. The measured received power is P1;
Replace the antenna under test, add the same power, repeat the above test at the same position, and the measured received power is P2;
Calculate the gain: G=10Log(P2/P1)——In this way, the gain of the antenna is obtained.

To sum up, it can be seen that the antenna is a passive device and cannot generate energy. The antenna gain is only the ability to effectively concentrate energy to radiate or receive electromagnetic waves in a specific direction; the gain of the antenna is generated by the superposition of oscillators. The higher the gain, the longer the antenna length. The gain is increased by 3dB, and the volume is doubled; the higher the antenna gain, the better the directivity, the farther the reading distance, the more concentrated the energy, the narrower the lobes, and the narrower the reading range. The Handheld-WIreless RFID handheld can support 4dbi antenna gain, the RF output power can reach 33dbm, and the reading distance can reach 20m, which can meet the identification and count requirements of most inventory and warehouse projects.